Member of The Author Gang 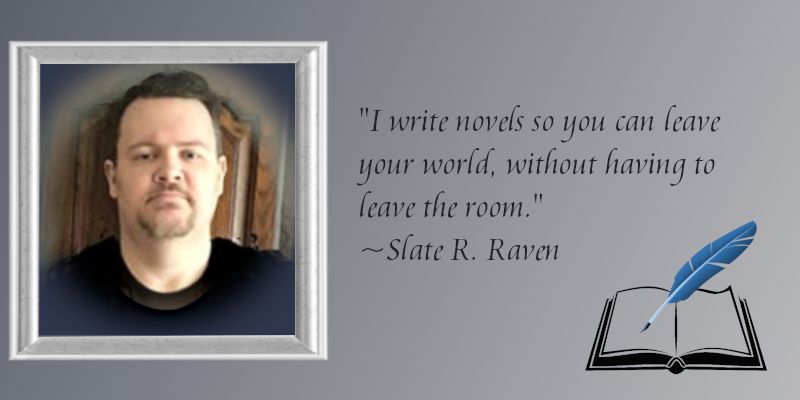 Born and raised primarily in Illinois, Slate R. Raven started his writing career after attempting several other means of artistic expression. However, after a debilitating injury to his spine, Slate was left with the option of watching daytime television or finding something that proved to be more productive. So with that, Slate chose writing as a means of purging the turbulent emotions that coursed through his veins over being a prisoner of one's own body.
The first of many novels emerged while sitting under a Laptop computer, a generous gift from his father. To pass the time during the long months of surgery and physical therapy Slate continued to write finishing his second novel, Fresh Start, which is where he was offered a contract with a publishing company along with several other of his books. After several years, Slate has made the decision to go the Indie route and has recently re-written all of his novels and hired an editor to bring out the best in his work.
Doctors had embedded a morphine pump in Slate's abdomen, allowing a drop of morphine to hit the nerve directly once per hour. This allows Slate a great deal more movement and less pain than prior to the injury; as an added bonus since the amount of the morphine is so slight since delivered directly to the source, Slate isn't forced to walk through life in a perpetual fog that oral painkillers bring about. Life has started to look a whole lot better!
At this time Slate has already re-written several of his older novels and each are waiting their turn at the editor, while new work is underway. Keep an Eye out for his all updates at www.SlateRaven.net. This guy has got his battery tuned up and you can expect some super-charged up stories coming your way soon!
website

Let us help you to publish your book